Apiculture in the Tropics

You must be handy, a real tough guy, withstand heavy labor. You must be fearless to continue and cope with agonizing bee stings while you quietly move on. You should feel the nature and assess, observe intensively and plan properly. African  beekeeping in Suriname, it is not just a trade, but a way of life. 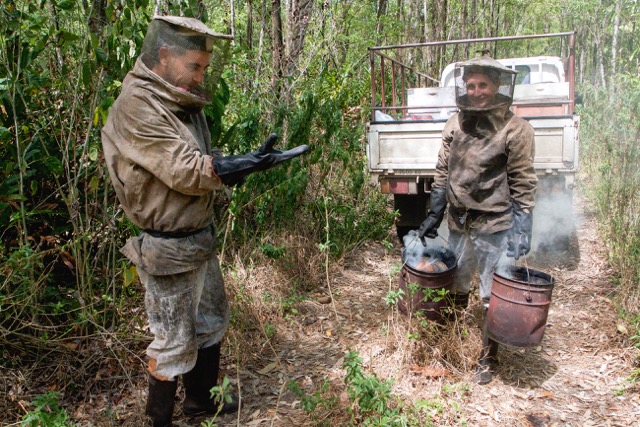 Stung by the African Bee
As young biologists Frank and Mariska were introduced to beekeeping during a  trainee-ship in Brazil. They moved with small farmers who collected wild honey in the forest.

Frank: “Those were real macho’s! They do not work with a bait trap to catch a swarm of bees, but would simply bust open a tree without wearing overalls!”
Mariska laughs: “Yes real idiots, over there!” But both were by then already mesmerized by the way of life of apiculture, the outdoor livemand working with the wild African bee.

Some eighteen years ago they caught their first small bee swarm in the Surinamese rain forest.

Mariska: “Back then we just did everything wrong. We did not know well yet how seasonal the beekeeping is here too. “Their first European crates were promptly eaten by termites. Then they built their own material. From the forest they supplied on a small scale to beekeepers in the area. In 2010, they could unexpectedly take over an old company and they went ‘large’.
Frank: “And that was quiet different!” They thoroughly studied the secrets of the African bee, observed, researched everything and managed to improve the production per hive significantly.
Mariska: “Dealing with African bees you really have to learn by yourself. You do can learn some from booklets but not much, you must experience it. It is different then in Europe or America.
Frank: “You can really not compare the wild African bee with for example the Italian variety.” And that wild African bee is worth a portrait: She is a workaholic who works hard from her birthday to her last gasp. She is very aggressive and defends her stock frantically and fanatically. But that same temperament also makes her highly productive. She is stronger than cultivated species because in nature only the strongest survive disease and disaster. And she cannot be manipulated.
Mariska: “The self-breeding of queens in order to split, is a bit of a waste for them all and if they do not like something they are gone.”

Faboesi ‘Honey From The Forest’
Faboesi means ‘from the forest’ and the apiculture company has tents with baits in the mangrove area, forest and savanna. Thus, they can supply honey of among others, parwa, mira oedoe, savanna flowers and flowers from the forest. The bees themselves keep this properly separated. In a very good year all three fields produce well.

Mariska: “A good year of honey is also when there are plenty of several honey varieties, if it was a good dry season with plenty of flowers and if more various trees bloom, such as apart from mira oedoe, for example, djamoe as well.”
With the help of bait traps they annually catch new swarms to keep the production up and running. Periodically, three employees help with the preparation and finishing. The couple supplies to the stores themselves. In addition, buyers step by every day. Mariska does the administration and management and schedules every day. A tough job besides the fieldwork. Frank is mainly in charge of the work with the bees themselves and decides when to drive to the fields for maintenance or honey harvest. That work they do together. 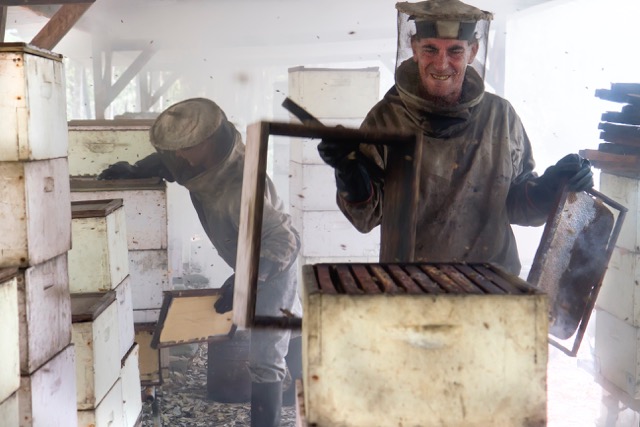 The Honey Harvest
The collection of the honey is physically intense, always exciting and proceeds in ‘one drive’. The tight preparation and the raging bees make that the action sometimes resembles a professional robbery, with uncertain factors.

Frank: “If you leave, you do not even know if there is honey.”
Mariska: “You take along everything because you do not know what you will find.”
Frank: “That is the most difficult decision, we have a big tent with forty, fifty swarms, how many frames do you take with you? If you have too many you lack enough space for the harvest. Too few, yes then you fall short and you will have to go back soon.” 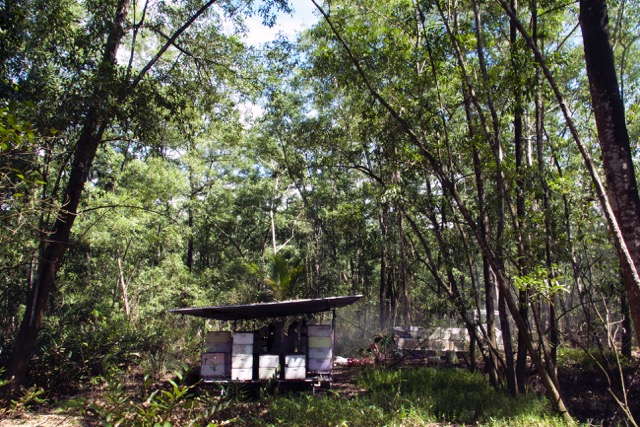 Upon arrival they park the car ‘on the street’ and they first just take a look at the bees how things stand. That is always a surprise.
Frank: “Sometimes it looks like a dead end, but sometimes you turn off the car engine and you already hear: ‘zzzzzz’, then you already know, be prepared!” At a distance they quietly put on their beekeepers suit. The baskets with coconut fibers are lit. The smoke acts as a distraction maneuver that keeps the bees busy for a while. The pick-up with the crates with empty frames is parked near the tent. And then it starts. Once switching of the frames has started, there is no way back and one must labor through until all the crates with full frames are back on the pick-up.

Frank: “You cannot say: ‘I will just come back tomorrow’. Then they will be double aggressive and will immediately attack you upon disturbance, you must really finish it.” Switching the frames should be smooth, but certainly not rough.
Despite the smoke and the raging bees that sting everywhere into their suit, they have to move slowly. Especially, in the savanna the heat is often murderous.
Frank: “sometimes about halfway through the tent you think: ‘oh, can we still keep it up?’ The stress can sometimes run very high. They can still very well remember the first intense bee stings. For example, Mariska once stepped out of the car at the wrong time without a suit and sustained over twenty stings. Frank was once stung in the tip of his nose and then became so angry that he stormed out of the tent. On another occasion, the bees happily crawled through a hole in his suit to graze him.
Mariska: “The stings are still hurting, but the feeling afterwards is gone faster. You become a little immune to it.”

A bigger problem are the old stingers that remain stuck in suits and gloves and cause painful joint inflammation. A beekeepers disease that even forces some beekeepers to quit. As the work gradually progresses in the tent, the bees become more angry, the heat becomes unbearable, the beekeepers more tired and the crates heavier. The last part of the work is debilitating. Then all full crates still must be loaded on the pick-up and it is a matter of driving away as fast as possible with the windows open to get rid of the last raging bees. And so we are back to the ‘robbery’. Only at a distance can the suits finally be removed and the sweat can be wiped off the face. Yet they certainly do not see themselves as brutal honey robbers.

Frank: “Yes, you do ‘rob’ their product, but a farmer who milks cows of course does that too.
It is only because of their aggression that it is more intense for bees.”
Mariska: “You provide the bees with a house, that is the service you supply. If things go bad, for example in the rainy season, they get sugar water.” “There are a lot of wild bees in the forest, but they do not have such nice big houses!” Frank laughs. 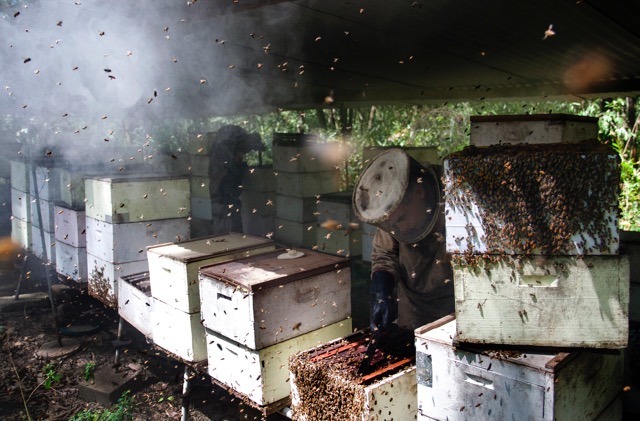 Bee Lovers
After all these years they have come to understand the African bee much better.
Mariska: “If now you look into a crate you can immediately assess how the swarm is doing.”
It is the whole view, sometimes the scent, the activity.
Frank: “If they are industrious and it buzzes pleasantly. Then it is often good. Indeed the lack of a certain sound can make you think: they are miserable.” Exiting stories follow about bee swarms, nectar and honey, drones’ cells, stocks and hatch and growth processes. And soon it becomes clear that the true beekeeping trade is so much more than harvesting of honey and requires a lot of knowledge and experience. They are trying to maintain large, healthy bee swarms with minimal failure.
Mariska: “The larger the swarm, the more productive the bees and the better resistant to bad times.” Large swarms can also fly further and that results in better flowers and sweeter honey. 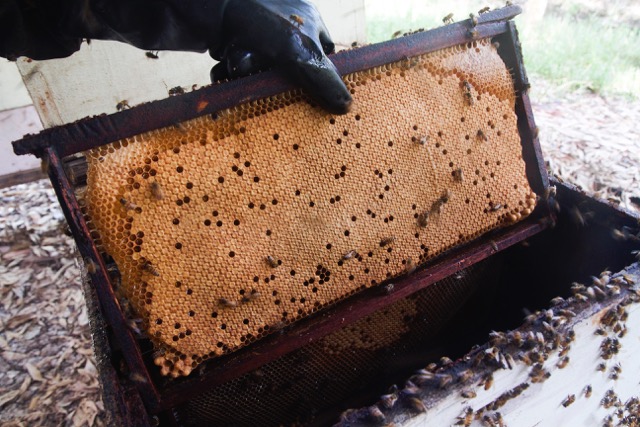 They each take care of their own swarm, because every beekeeper has a different touch. In that way they can take different decisions and learn more from each other. And even though the aggressive African bee certainly does not seem to be cuddly, they both feel sympathy for her.
Mariska: “I really do miss the bees themselves. If we have not been there for a while then I think: ‘how would they be doing?’ It indeed surely is nice to follow their process.”
Frank: ‘At a certain moment there is a particular swarm that you like. Not specifically one certain bee, because they form one body altogether. There are quiet moments that things go well and that you only perform maintenance. Then the bees are happy and our work is not so heavy. You do not disturb them, they stay happy, no one attacks you. Then it is nice.”

By now they have more than three hundred bee swarms and they enjoy the ‘liquid gold’ that this supplies. Even though it is still very hard work. The honey of Faboesi is pure nature, of high quality and loved in the area. Despite a modest packaging they once already won a third price for the best honey in the Caribbean.
Mariska: “People often say: “Why don’t you export?” But the Surinamese market is not yet saturated and we do not want to become too big.”
Frank: “In that case you will only be occupied with personnel matters instead of the real work.” They hope that their son or daughter will later take over the company, but that is not yet certain. One thing is clear though: “We do see ourselves retiring but we never vision ourselves as not keeping bees. We will always have some small swarm or so, that will not go out of our system anymore.”
Like 0 Facebook 0 Twitter 0 Pinterest 0 WhatsApp 0 Email 0
Facebook 39,500Fans
Scroll to top
Close
© Copyright 2021 | Popular Media Group | All rights reserved
Close
Browse Categories