‘s Lands Hospital formerly known as Military Hospital is the oldest hospital in Suriname and the city’s largest national monument. Writing the history of this Hospital is like writing down the eventful life history of an old man. From several sources, people get (sometimes conflicting) data and try to integrate them into a life story. The rise of the hospital and the development of medical care is better understood against the background of the colonial history of Suriname. The lack of money and political factors left their mark on the history of the Hospital, both in earlier years and now.

The first mentioning of a hospital in Paramaribo in Suriname’s history was in 1679. Governor Heinsius reported in his financial statement to the States of Zeeland that he paid 200 pounds of sugar to the hospital for medical care to soldiers. This indicates that a kind of hospital was present that year.

At that time there were hardly 300 soldiers present in Suriname. In the years that followed, the armed forces in Suriname continued to expand. First of all, more and more soldiers were killed or wounded by the attacks of the Maroons and died of various tropical diseases. An adequate military hospital became an urgent requirement. In 1758, therefore, a start was made on the construction of a new Military Hospital on Gravenstraat. It was completed and commissioned two years later in 1760. The first surgeon major of the hospital is Caspar Lodeker.

The report by carpenter Hanekroth gives the following description and layout of the Military Hospital in 1772: A two-story building, which stands on a brick-built brick base, in between which cellars have been installed. A warehouse is located in the attic and there are three officer rooms on the second floor in the right wing. There is also a pharmacy room, a pharmacy and a hospital room in this building. There is also a room for the duty doctor. Upstairs were another hospital room and a medicine room. On the site there was also a ‘jaashuis’ for scabies and leprosy patients (jaas = jaws), a row of slave houses, laboratory, kitchen, bakery and another quarantined building for infectious diseases.

From 1889, a doctor’s educations started in the Hospital under the name “institution with a fiveyear course for training young people to become district doctors”. The nurse training started in 1911, when the diploma from the Military Hospital was first awarded to seven graduates. Since 1931, indigenous and maroon people were trained in nursing and wound treatment. 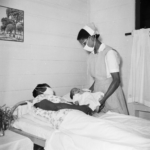 In the years that followed, the Military hospital was expanded with several buildings. Civilian patients were also admitted. In 1934 the Military Hospital became a civilian institution with the name ‘s Lands Hospitaal, a name that had already been used for the hospital in the leprosy regulation of 1830.

The Hospital’s oldest building at the Henck Arronstraat was completely remodeled in 1925, and is now home to the Ministry of Health. ‘s Lands Hospital currently occupies several buildings on the grounds behind the old building. The main entrance has been moved to the Tourtonnelaan. Meticulously maintained records report that over the years the hospital underwent multiple expansions, changes, demolitions and renovations.

Although the proposal was made in 1954 to convert ’s Lands Hospital into a nursing home, and in 1970 the Council of Ministers decided to abolish the Hospital, this was never implemented. It became increasingly clear that The Lands Hospital could not be missed and on the contrary took an increasingly important place in the especially poorer community.
Like 0 Facebook 0 Twitter 0 Pinterest 0 WhatsApp 0 Email 0
Facebook 39,500Fans
Scroll to top
Close
© Copyright 2021 | Popular Media Group | All rights reserved
Close
Browse Categories