I am Fabian Vas and I wish to welcome you to the fantastic expedition that I was just on. The destination was the Kasikasima Mountain, which is on the Palumeu River, a tributary of the Tapanahony.

This expedition was an opportunity for me to experience, film and photograph nature at its best. My equipment featured 13 items and because I was all by myself they were my sole responsibility the whole time during this trip. Some of the following items were on my list, totaling in on a whopping 70 kg’s. A drone, tripod, 4 awesome camera’s, glide cam, generator, laptop, external hard drive, my tent and airbed and some other stuff. After heading south by plane from Paramaribo’s airport Zorg en Hoop, we landed at the Jungle airstrip of Palumeu after about an hour in the air. Here I was welcomed by the locals and a team from METS, one of Suriname’s first tour operators. 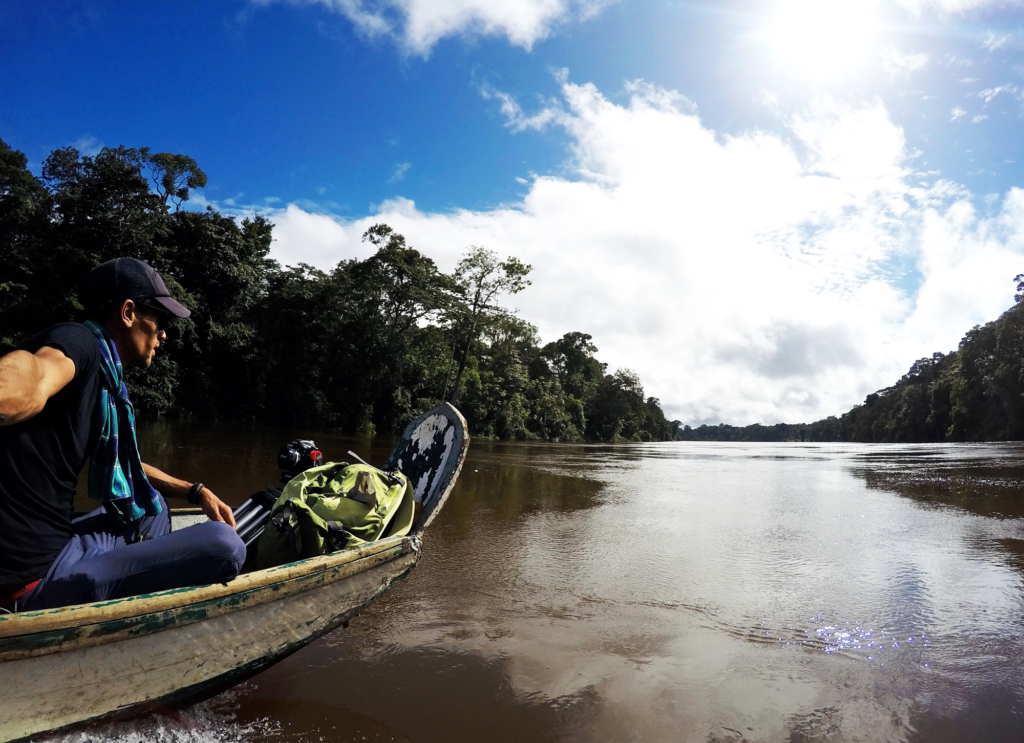 After arrival we were treated to some refreshments. The others on the flight and I were then shown to our rooms. I was now able to finalize my preparations and organize my stuff in the comfort of this neat and cozy room. Palumeu is a beautiful setting offering a staggering view of the Tapanahony River. Seated at the balcony of my lodge it was really worth it to take my time and really live and feel the nature in this awesome pristine Jungle. After a while I was summoned for a delicious evening meal.

The next day we left early by dug out canoe and headed upriver toward Poti Hill, named after its discoverer Mr. Poti who also happened to be our boats man on this trip. After about half an hour we reached the spot on the river were we left the boat and geared up for a hike through the Jungle that would include some rain and a lot of mud. Two men helped out with my drone and tripod as we headed towards the hill.

The hill was to be my first taste on this trip of a unique view of looking down on the Jungle from higher up. Roosevelt peak and Kasikasima were visible at a distance. Kasikasima was the ultimate goal of the expedition of course. One of the days also took us to Kudebaku rapids one of the biggest in the area, where I spent some time to take pictures and film the area. The eternal power of the water smashing against the rocks never ceases to amaze one when visiting the Surinamese Jungle.

KASIKASIMA MOUNTAIN
After the guides had prepped the boat and fit in all our cargo and readied our positions we were finally on our way to Kasikasima. A careful distribution of cargo and people in the boat is essential for safely navigating a river as rocky as this one. The first leg of the journey was a 4 hour dash to Kamakabari, a place where we set up camp for the night and slept in hammocks. After a great sleep in the forest you start feeling the vibes of the Jungle, which can be both peaceful and exciting at the same time. The next day we headed towards our next stop Tronbaka rapids. These rapids cannot be crossed by boat so we had to transfer our cargo to a smaller boat, which awaited at the top of Tronbaka. Carrying cargo in the equatorial heat through the Jungle passes is no small feat. 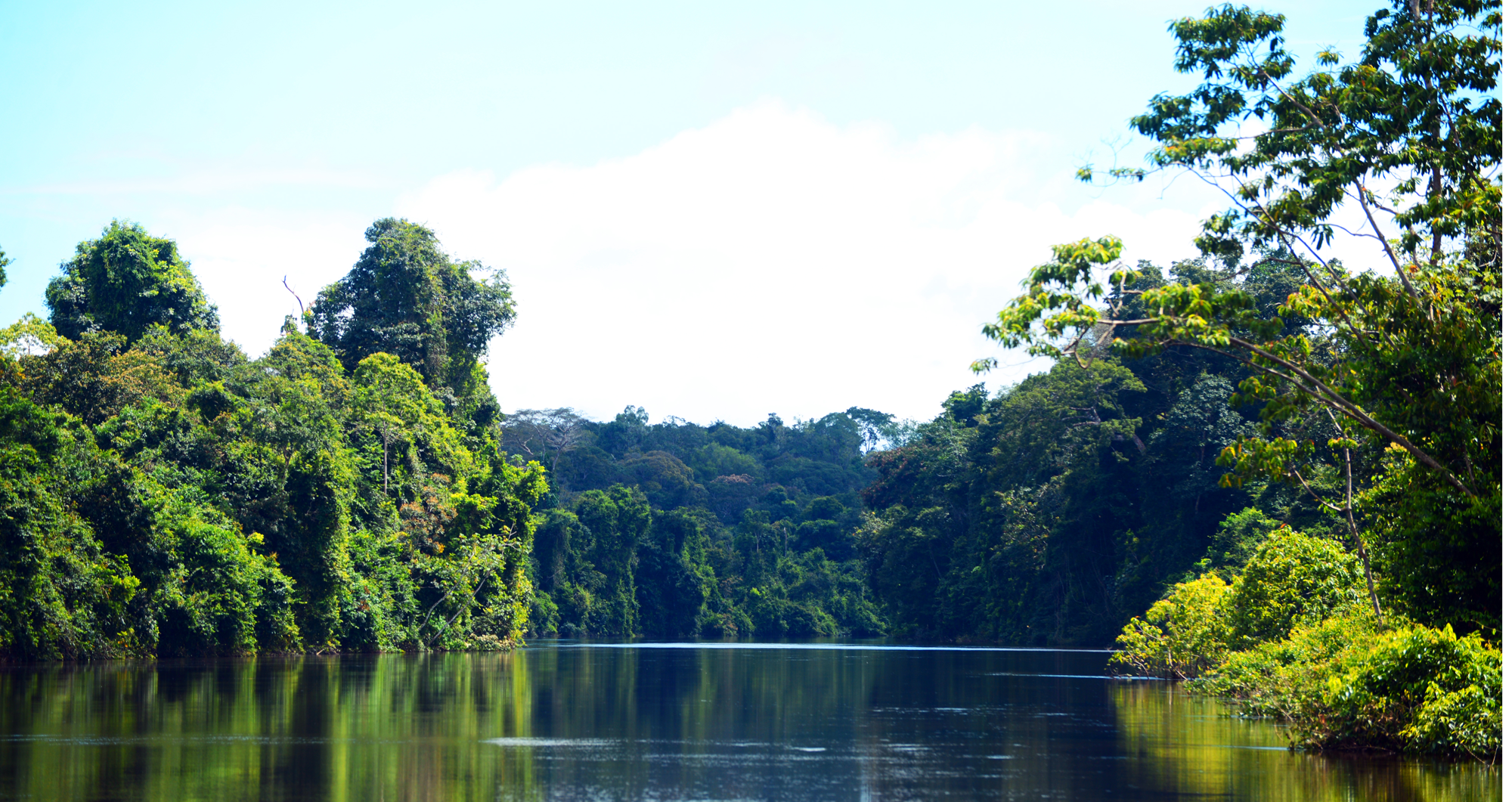 After a small break and packing the smaller boat we headed towards our final camp at the Sawaniboto rapids. This last part of the boating journey took a good half hour after which we safely arrived at Sawaniboto camp, a camp which offers everything needed to stay alive in relative comfort. After spending the night, everyone is readied for the height of the expedition, one of the Kasikasima mountain peaks.

A tough hike through the dense untouched forest which lasts about 3 hours ends in a climax. After being blanketed by tropical forest for the past few hours, reaching the clearing of the peak and being able to see and absorb the forest from above is truly rewarding. Poti Hill a few days before had given us a true sense of what was yet to come. Kasikasima had not disappointed. Of the group I am the last one to reach the actual top, soaking myself with the images and feels of the great Kasikasima. The last part of the trip was definitely the hardest I later recounted, pulling yourself up by the little brushes, and pushing forward to that final climb but it was so overwhelming I didn’t realize it at the time. As the forest gradually unlocked us, the surprise view took more and more shape in the last few hundred paces of the hike. 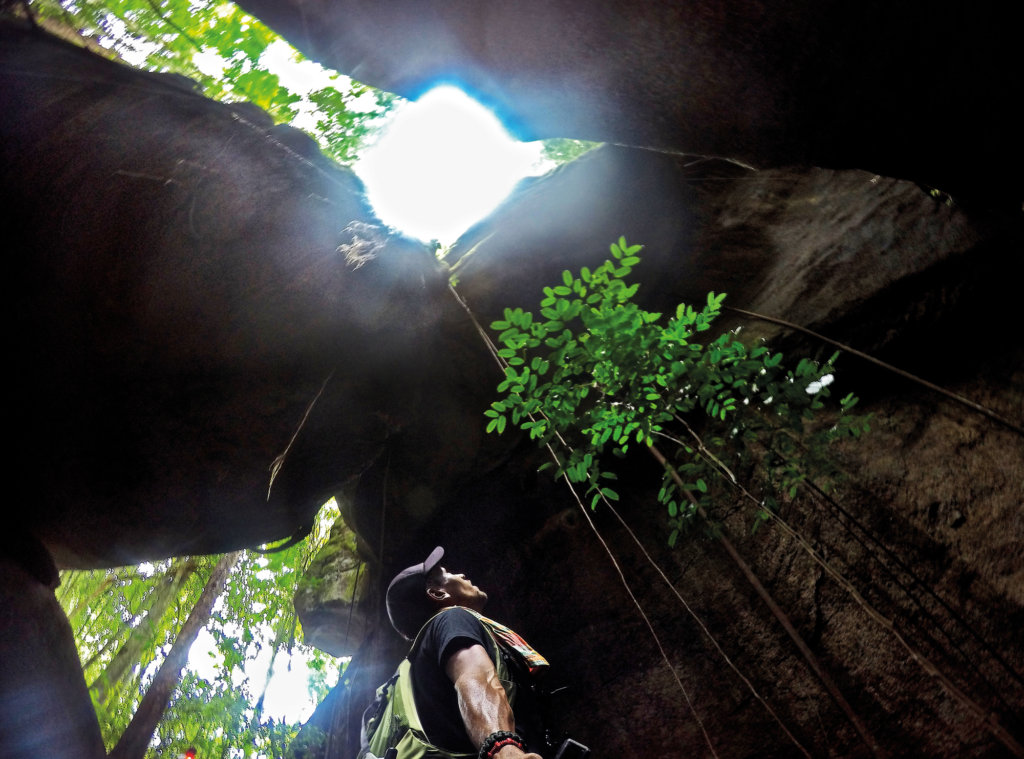 The connection I felt with the surrounding one was the most complete I have ever felt. One encounters so many things on a trip like this. Rocks 30 m long and 12 m high, which have been carved by water for thousands of years. The little mountain creeks offer which is perfectly clear and deliciously satisfying. After reaching the peak I had to get serious again soon to start operating my Go Pro’s drone and my faithful Canon. Operating the drone from that position was nerve wrecking, going 500 m out and 250 m up from the peak where we were standing. It took a lot of concentration, but in the end it the results were there.

After the ecstasy of the final climb and action of filming was over I stayed behind for a while to once again absorb nature and truly soak myself in it, as I had done earlier on the trip starting at my balcony at Palumeu. And I got what was coming to me: being able to watch two groups of apes being very protective about their territory and making that absolutely to each other. It was clear that the altitude didn’t bother these guys one bit. These pages would have a hard time explaining the true feeling of engulfing yourself in Jungle life the way I did on this trip. I will suffice by saying again what a great experience this was and to anyone who is up for a challenge like this I say: do it!
Like 0 Facebook 0 Twitter 0 Pinterest 0 WhatsApp 0 Email 0
Facebook 39,500Fans
Scroll to top
Close
© Copyright 2021 | Popular Media Group | All rights reserved
Close
Browse Categories