On the 9 th of March Hindus all over the world celebrate Holi, the Festival of Colours. The festival has gained tremendous popularity over the years and is widely celebrated in Suriname by people of all religion, ethnicity, age and gender. It conforms to what the essence and message of Holi really is:
A celebration of Unity.

Holi is an ancient Indian Hindu festival which was originally known as ‘Holika’. The festival finds a detailed description in early religious scriptures and is of historical significance. It marks the beginning of spring and the harvest season and is celebrated as the beginning of the new year. It also signifies the victory of good over evil and is celebrated as a day of spreading love and happiness.

The festival lasts for a night and a day. The first evening is known as Holika Dahan, where people perform rituals in front of a bonfire, praying for their inner evil to be destroyed. The following morning is celebrated as Holi, the festival of colours, where people sprinkle and smear each other with different colours and throw coloured water balloons. Anyone and everyone are fair game, friend or stranger, rich or poor, man or woman, children, and elders. The festival of colours teaches humankind to transcend above the caste and creed. It is a festival to forget old grievances and to meet others with great warmth and in high spirit.

Holi Phagwa in Suriname
Holi is celebrated differently across India, with traditions varying slightly from state to state. The Surinamese people of Indian descent mainly come from the region Bihar in the state Utter Pradesh. In Bihar the Holi festival is known as Phagwa in the local Bhojpuri dialect. And that is how the people in Suriname call this festival of colours to this day.

Chowtal
In Suriname there is a tradition called performing ‘Chowtals’. Music groups carry ‘dholak’ (hand drums) and ‘majeera’ (small cymbals) and go from place to place to sing folk songs and dance. Local shops and families invite these chowtaal groups to jointly celebrate after which the group moves on to another place.

Another tradition introduced in Suriname and originating from Utter Pradesh is the ‘Makhan Chor’ competition. In this game, a group of boys form a human pyramid to reach and break a pot of coloured water which is hung 7 meters from the ground. Since 2013 the challenge cup has been won by groups from different ethnicity. 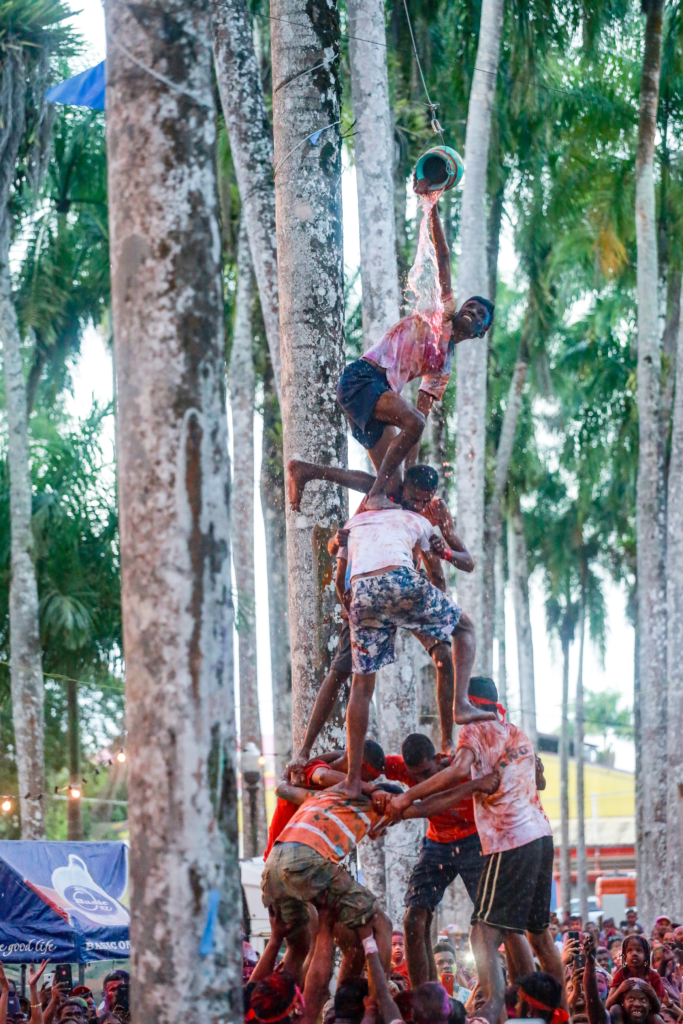