Where the Amazon meets the sea they come from the last bastion of freedom. Suriname, a former Dutch colony famously called the WILD COAST (John Gimlette) became independent in 1975 and offers one of the last sanctuaries for freedom seekers. 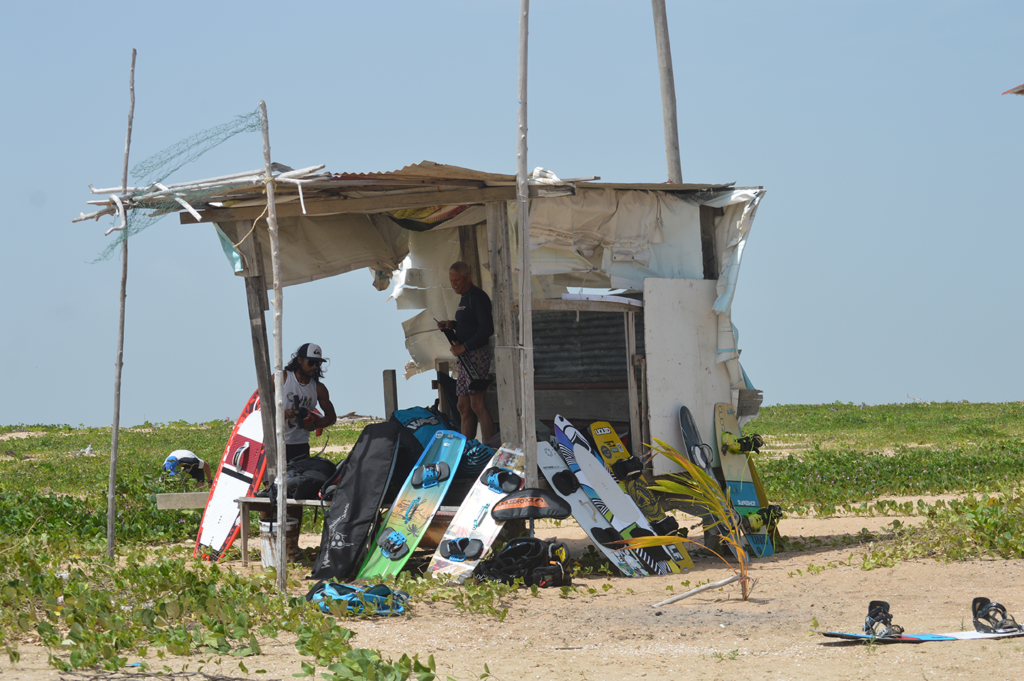 Suriname has a small group of dedicated kite boarders. With no kite shops, schools or any watersports community, inspiration came from Kite Magazines, movies and hearsay. Self-teaching with YouTube as the only resource available proved a challenge (bruised and broken bones included) but was eventually a great success. This kite community consists of 9 kiters called the Suriname Soul Riders. Riding to ride, spreading and sharing the stoke! With few kite spots to choose from this community has to be creative when it comes to fun. They ride everything from Twintips to Surfboards to foils and during the windless days fun happens with the help of a wakeboard winch.

Braamspunt
There are not many kiting locations in Suriname. The best spot is Braamspunt, a 5 km stretch of beach, which is only accessible by boat from the Suriname River or by helicopter from the City of Paramaribo. Braamspunt is actually: a giant mosquito, caiman and snake infested swamp that ends in a tiny stretch of sandy beach on the north (Atlantic Ocean) coast of Suriname replete with brown, muddy water. There is a constant current called the Guyana stream that pushes 4 knots at its peak. Braamspunt is a far cry from the well-known blue watered, sandy beaches of the Caribbean but it is as clean and pure as any well kept secret should be. The local population rarely visits which makes this a kite boarders paradise. However, there are visitors. Frequent visitors include giant sea turtles, jelly fish, Portuguese Man-O Wars, and leopards.
Equipment: Foiling with a strong foil setup (one can hit a fish or, at times, a piece of driftwood), twin tip and surfboards.

Suriname River
Brackish water Kiteboarding about 15 km upriver. Located downtown of the capital Paramaribo (named after an Indian village) this is an intermediate to advanced spot. With just a 3-meter-wide cement ramp to start and get back to. It is the perfect place to screw up and plough through the mud to get back to shore. High and low tide can generate 3-5 knots of current that will drag you to sea. Foil boarding is the best option here. Watch out for giant wooden fishing boats that sometime seem to barely miss you, although they are always the first to help when you get in trouble. Long live the fishermen.
Equipment: Foiling with the longest mast possible, twin tip and surfboards.

Hydro Lake
Hydro lake called “Stuwmeer” locally. This is a 1600 km2 fresh-water lake, man made for green energy, 120 km from Paramaribo. It is piranha infested and a spectacular place to Kite. Only intermediate and advanced because of the thousands of dead trees sticking out of the water, constant reminders of the flooding decades ago. The locals patiently waited for a drought 4 years ago and cut down around 1000 dead trees to make an area of around 2 km2 to kite when the water would rise again. It has risen since and is now a playground for small sail boats and kiters.
Equipment: Foiling only with short masts, twin tip and surfboards, small catamaran and sun fish.

Spang Pang
Spang Pang translated Sexy pan of water is about 4 hours’ drive west from the capital. It is a 0.8 m to 1.2 m deep mini lake close to the coast. It is the perfect place to learn. It is safe with no obstacles except for an old fishing hut built on the water, which is used by the kiters to “store” their kids and partners during epic sessions.
Equipment: Foiling only with short masts, twin tip and surfboards.

Suriname has a small yet dedicated and tight knit kite community. As there are no kite shops or schools they depend on themselves and each other for equipment repairs and safety and plan to explore more kite spots in the future.
Like 0 Facebook 0 Twitter 0 Pinterest 0 WhatsApp 0 Email 0
Facebook 39,500Fans
Scroll to top
Close
© Copyright 2021 | Popular Media Group | All rights reserved
Close
Browse Categories