Mangroves are trees that live in two worlds

One foot on land and the other in the sea. Mangroves thrive along intertidal coastlines of the tropics and subtropics growing in harsh environments characterized by saline conditions and inundation on one side, and aridity on the other. These forested wetlands are highly productive and home to a wide variety of flora and fauna.

The position of mangroves at the interface of land and sea means they form a unique ecosystem that attracts a combination of terrestrial, freshwater, estuarine and marine species from surrounding areas. Many species of birds and insects can be found within the mangrove canopy. Birds roost in the canopy, shellfish attach themselves to roots, and snakes and crocodiles use them as hunting grounds. 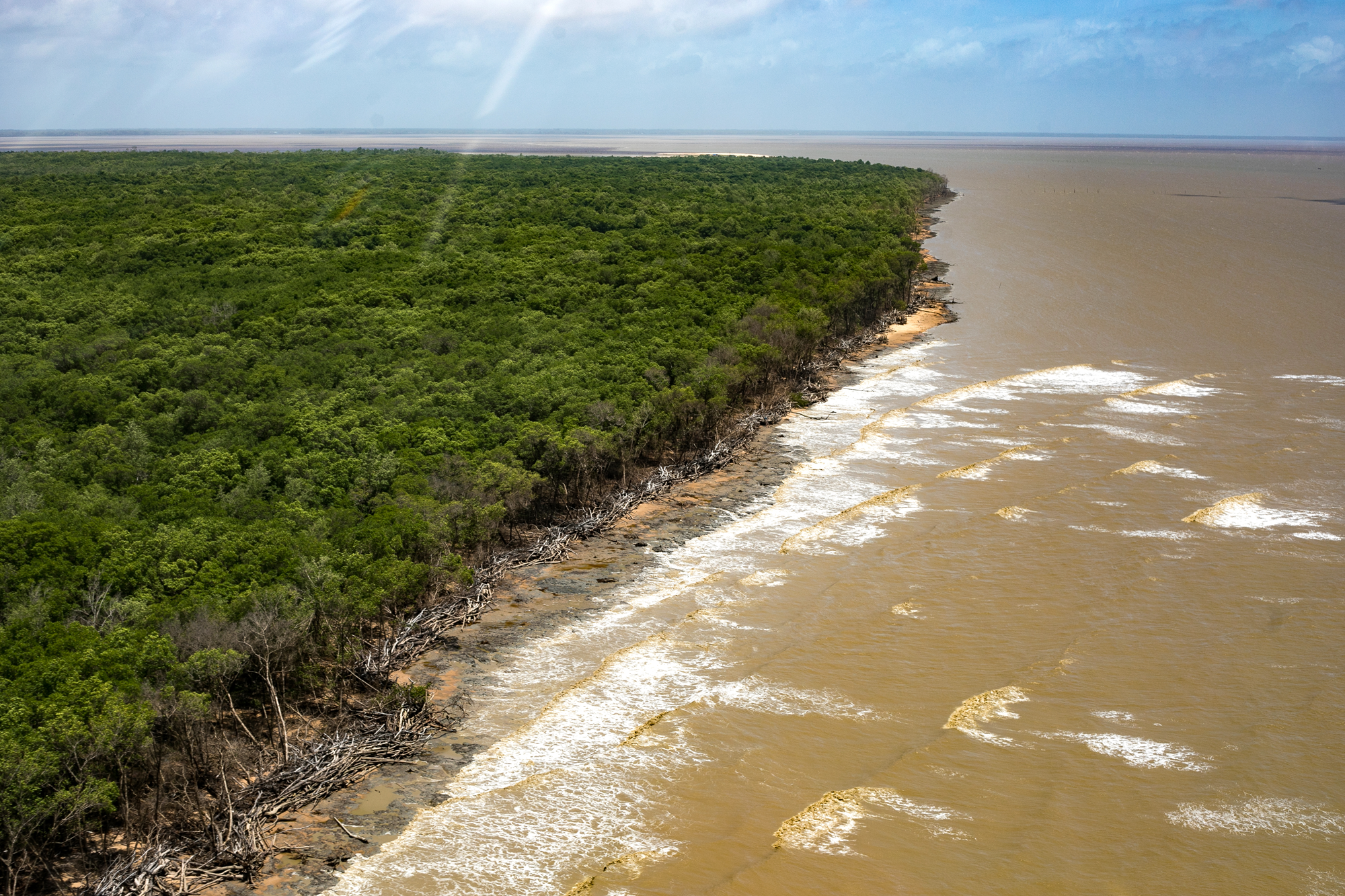 Mangroves provide a valuable nursery habitat for fish and crustaceans; a food source for monkeys, deer, birds, even kangaroos; and a source of nectar for bats and honeybees. Under water, a variety of important fisheries species such as shrimp, fish and crabs, use mangroves as nursery areas, where the trees and root networks provide food and shelter from predation. After spending a few months to years in the mangroves, these species migrate to deeper, offshore waters.
They support the livelihoods of many people by providing food, fuel to cook and heat, wood to build homes, and much more. In addition, mangroves improve water quality and inspire rich cultural traditions. Mangroves are ecosystem engineers that shape, build and maintain the integrity of their surrounding physical environment and protect communities against erosion, waves, and extreme weather events. Finally, mangroves serve as important carbon store and sink, sequestering more CO2 than any other ecosystem, thereby helping to fight climate change.

It is clear that these coastal forests are very important to both the natural and the human world. This importance is heightened in many countries and coastal settings where there is a high degree of dependence on mangroves and lack of alternative livelihoods. Without mangroves, many communities would lose their primary source of food and fuelwood, and be placed at higher risk from storms and coastal erosion. 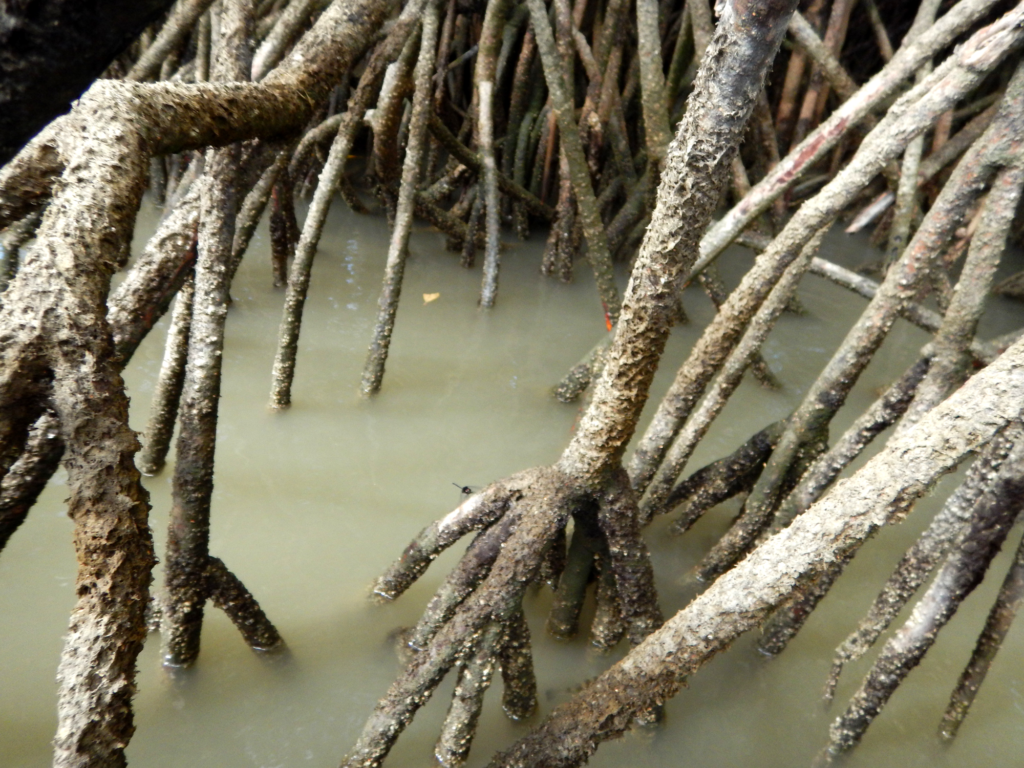 Mangroves of Suriname
The 386 km Suriname coastline is part of the Guianas and is characterized by extensive mangrove forests, narrow sand and shell beaches and large mudflats, which are slowly moving westward at an average speed of about 1.5 km/yr. With their low-lying coastal areas, the Guianas are markedly vulnerable to climate impacts such as sea level rise. About 80 % of the population of Suriname lives along the coast and the majority live in the Capital City of Paramaribo which lays along the mouth of the Suriname river and Atlantic Ocean.

Three species of mangroves occur in Suriname: the black (Avicenna germinans), red (Rhizophora mangle) and white (Aguncularia racemose) mangroves. The occurrence of these different species vary depending on the salinity of the water they grow in or near.

Mangroves not only act as a natural protective barrier along the regions` dynamic shoreline, but provide a wide array of other ecosystem services that benefit communities. The food security for many coastal communities is closely linked to the health. Considering the life support function of mangrove ecosystems, their high productivity and important position within the wider seascape, it is clear that loss of mangrove forests can have far-reaching consequences. There is every reason to take good care of them.

Suriname’s mangroves are under increasing threat. Anthropogenic activities such as infrastructure expansion, overfishing, inappropriate construction of dikes, sand and oil mining, conversion, coastal erosion, and hydrological disturbances have led to loss and degradation of mangrove areas. Already mangroves here are exposed to a natural erosion cycle. Now with the prospect of sea level rise there is a need for urgent action to safeguard remaining mangroves to protect property, lives and livelihoods along the coast and avoid more costly and counterproductive remedies such as dikes.

Overall interest, knowledge and awareness of the values of mangroves is low in Suriname. They are often perceived as stinky, mosquito invested dirty and dangerous swamps. Unfortunately, we do not protect what we do not value. It has been proven that coastal communities play an indispensable part in safeguarding their own environment and becoming agents for protection. Their involvement in conservation efforts therefore is critical for success. By enhancing their role in advocating the benefits and values of mangroves and the need to protect them, a valuable support base can be created for their sustainable management.

An effective way to engage communities is to involve them in mangrove-based ecotourism. There are many examples of such activities in the world including boat tours, board walks, kayaking, bird watching and fishing. Others include wildlife watching tours such as for the scarlet ibis, manatees, monkeys, and crocodiles. Organized mangrove ecotourism is practically non-existent in Suriname which is unfortunate as it has the potential to generate income and employment for local communities and at the same time serve as outreach and education for the public. 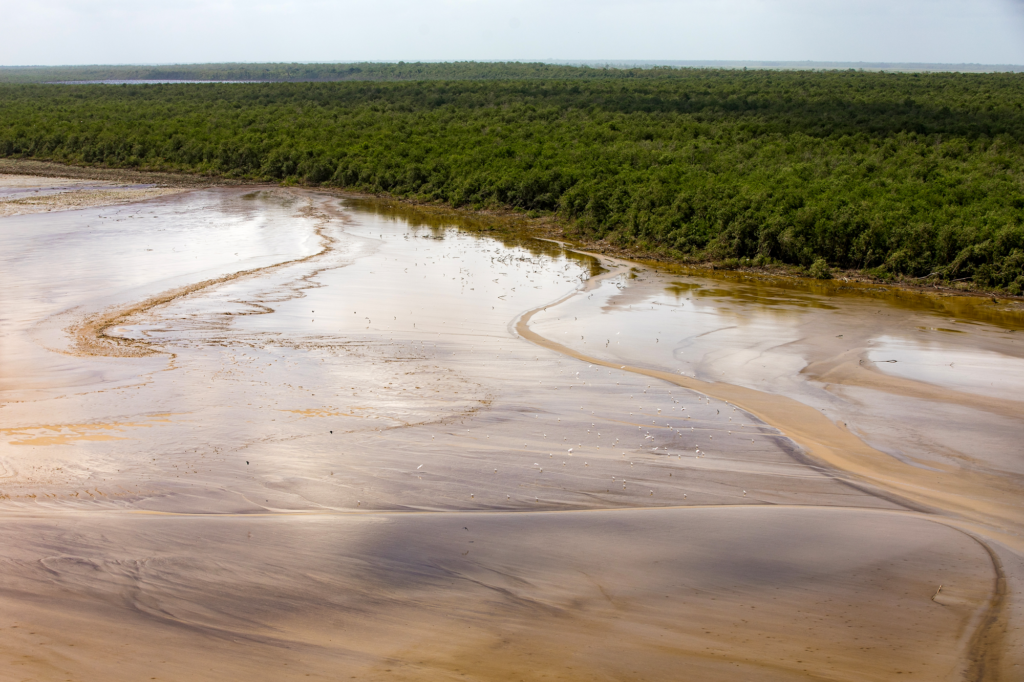 The Coronie Mangrove tour
In 2017, World Wildlife Fund (WWF) Guianas in Suriname, the Foundation for Development through Radio & Television in Suriname (SORTS), the United Tour Guides Suriname (UTGS) and Mangrove Action Project (MAP) with funding from WWF and the IUCN National Committee of the Netherlands, joined hands to develop mangrove eco-tours in the coastal district of Coronie. Based on the ‘Marvelous Mangroves’ curriculum developed by the MAP, a group of community members were trained to become Mangrove Rangers or Eco-Guides and to enhance their understanding of mangroves as well as knowledge and skills in tour guiding and visitor handling to enable them to lead a Mangrove Tour. They were also trained in bird identification so they can lead Bird Watching tours. Not only does the Mangrove Tour generate a new source of income, by empowering these Mangrove Rangers, they can use their new knowledge and skills to reach other community groups such as fishermen and school children and teachers.

The district of Coronie is situated along the West coast of Suriname. With just 3000 people living on an area of 3900 km ² it is the least populated district of Suriname. Its numerous coconut palms and laid- back atmosphere give it a real Caribbean feel. Parwa (black mangroves) here is crucially important for food and wood and for oil and honey producers, fishermen and crab sellers. Totness, the name of the capital of Coronie and Friendship, the name of the administrative center reminds us of the Scottish that established their plantations here in the 19th century. In Friendship the Mangrove Education Centre Coronie (MECC) is located. Completed in March 2018 this center is a crucial landmark for mangrove education and awareness.

It is from this Centre that the so called ’Coronie Mangrove Tour’ starts, offering a unique blend of nature, culture and history. This Tour is tailor made, to suit your interests and can cover a half or a whole day. Guided by so called ‘Mangrove Eco-Rangers’ (trained community members) one can choose for a visit to the mangroves, bird watching, visits to cultural and historical features, a ride on an original Ox cart, and visits to local entrepreneurs. The Tour provides an opportunity for local producers to promote and sell their products. For example, the tour can include a visit to a local straw hat maker, coconut oil producers, or beekeepers that make the famous Coronie ‘Parwa honey’ made by mangrove bees. Similar efforts to develop a Mangrove Eco-Tour in Commewijne and Nickerie districts are now underway.
Like 0 Facebook 0 Twitter 0 Pinterest 0 WhatsApp 0 Email 0
Facebook 39,500Fans
Scroll to top
Close
© Copyright 2021 | Popular Media Group | All rights reserved
Close
Browse Categories