Imagine a quiet village on a gentle hill

Roofs mostly made of palm leaves, some zinc ones in between, widely spread underneath big trees. Smoke of wood fires slowly mixing with the vapour of the rainforest. A welcoming smell of barbecued fish and the sound of vivid sula’s, (rapids), in the Tapanahoni River. Any visitor arriving at Apetina in the Surinamese jungle, can only be taken by these first peaceful impressions. 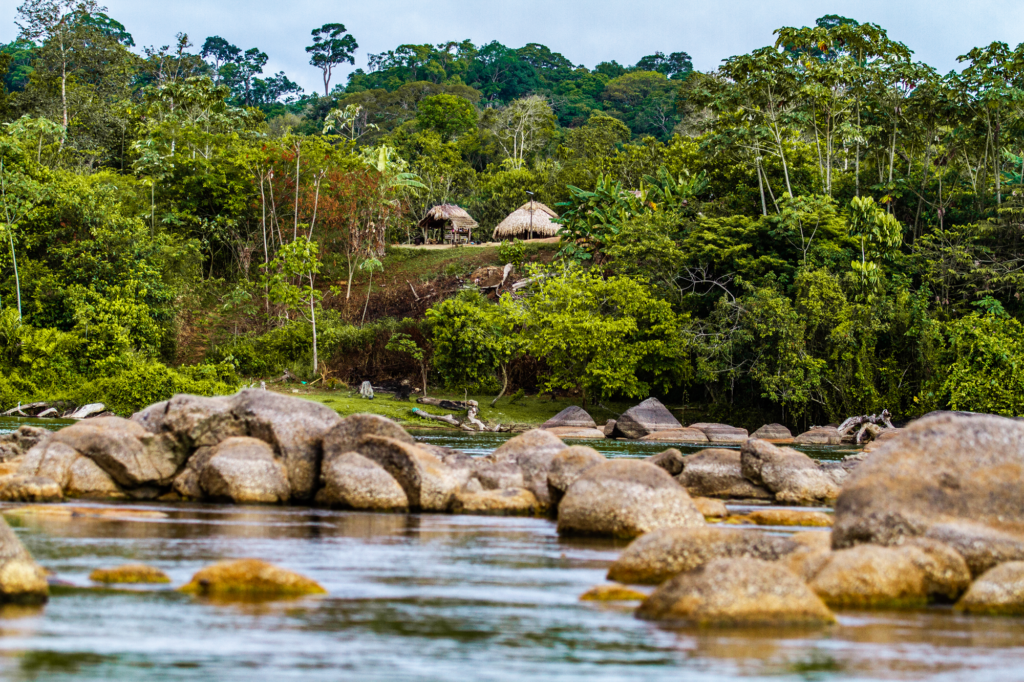 Apetina is the home of a tribe of Wayana people that live among some of the big rivers in the Surinamese rainforest. The village, originally named Pïrëuimë, was gradually called Apetina, referring to Chief Kananoe Apetina who established the first camp at the Tapanahoni River in 1938-1940 with his three wives and five children. They were part of a large group of Wayana that fled from Brazil during tribe-wars and settled in about seventy camps at the Tapanahoni River. Trading with the local Maroon people who also live in the rainforest. Christianity came in 1960 and a local school was build in 2006. 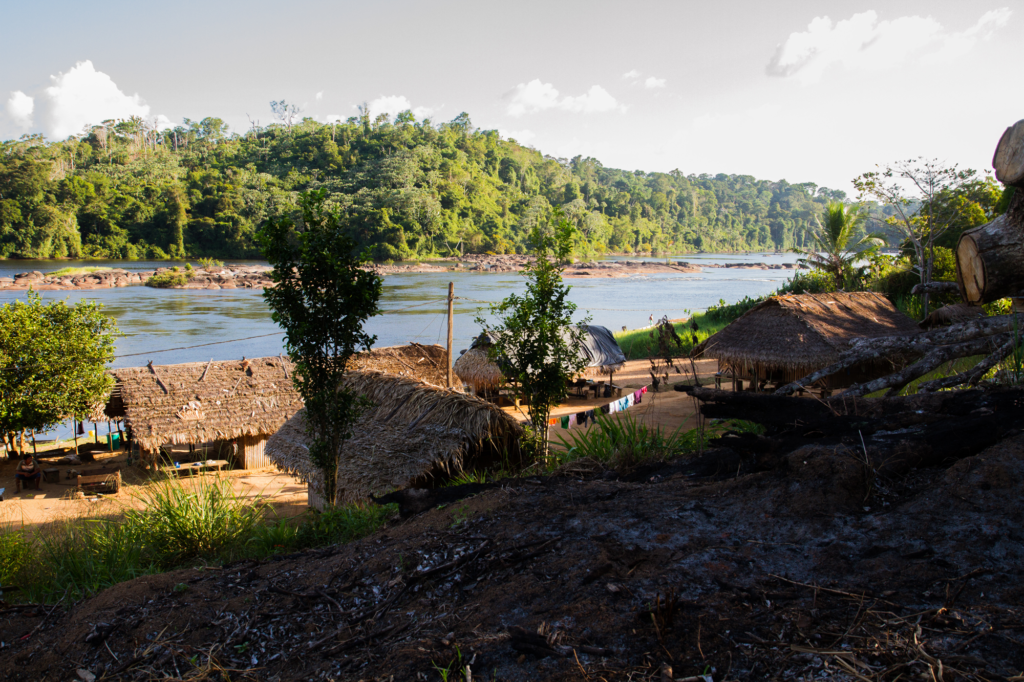 When entering the village of Apetina today, it becomes clear that although the traditional way of life is still very present, modern life has also taken its place. As a fishing-team of Tomahawk Real Adventure, landed on Apetina a few years ago, with a little bush plane from Gum Air, they met with a community of Wayana, wearing modern clothing and handling cell phones. Though the cell phones are old nokia’s and it’s always a battle to get hold of credit callcards. Most of the youngsters speak a little Dutch, (which is the main language at school). Some of them pretty well. 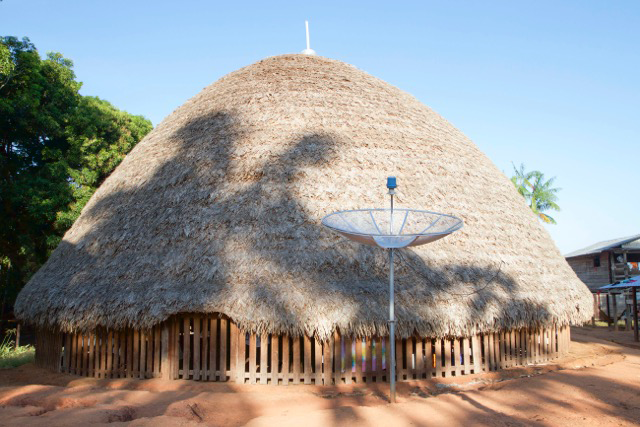 The image of a big satellite-dish, right next to the traditional tukusipan says it all. The tukusipan is the central meeting place of the village. It’s a large space under a palm-leaf roof, built with old and impressive craftsmanship. Important meetings, celebrations but also religious services all take place in the tukusipan. 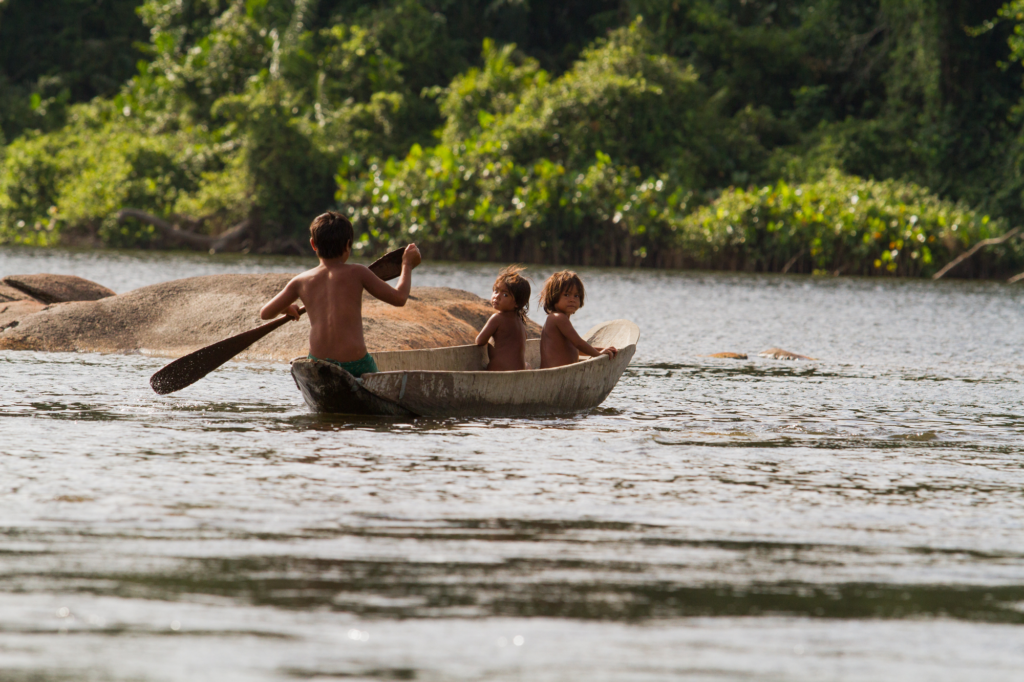 Nowadays also facilitated with a big television-screen fed by sun cells!
Yet the daily life of the Wayana in Apetina does not seem to differ that much from the old traditional lifestyle as described well in a study-report of the Wayana people in 2006: “A day in the life of a typical Wayana man or woman starts with an early-morning tradition of socialization. At six a.m. responsibilities resume, with the women in charge of cooking, agriculture, and cleaning, and the men tending to hunting and fishing. Early marriage practices, which include young men joining the bride’s family, burial customs, and the preservation of the Wayana language are also a continuation of the traditional Wayana way of life.” 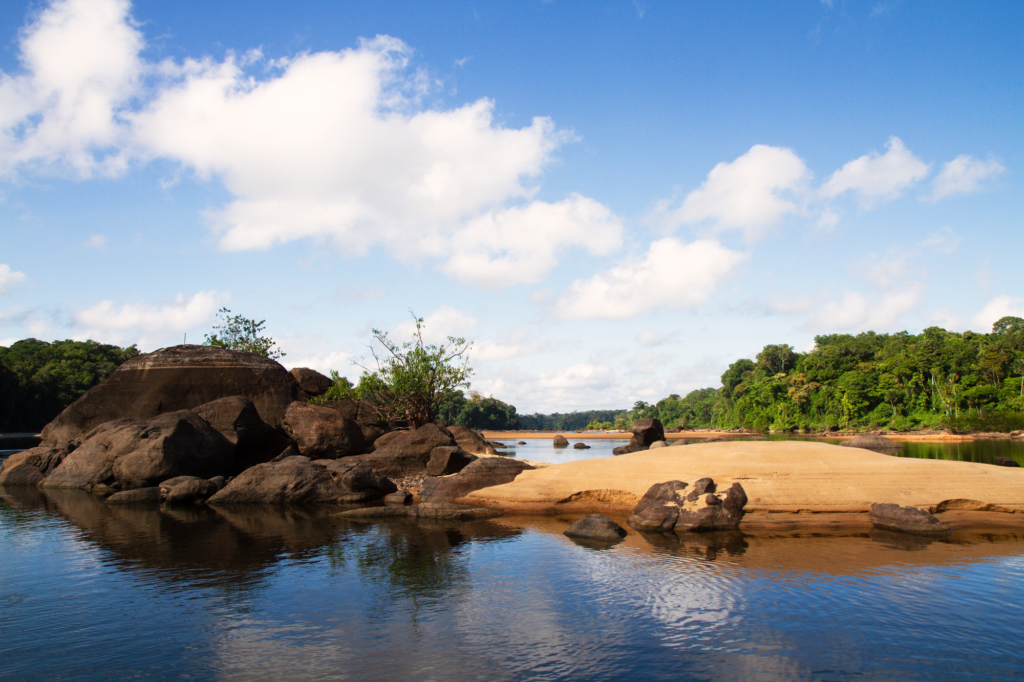 Almost all villagers attend church on Sunday afternoon, customs introduced by the missionaries. But hammocks are still woven daily and hand-made jewelry is created among many other crafts. Cassava is cooked, to make the alcoholic drink ‘kasiri’, or to be eaten with peprewatra (pepper soup), and fish or meat from the bush. When there’s no school, the children play at the riverside where all action takes place, like it has always been. 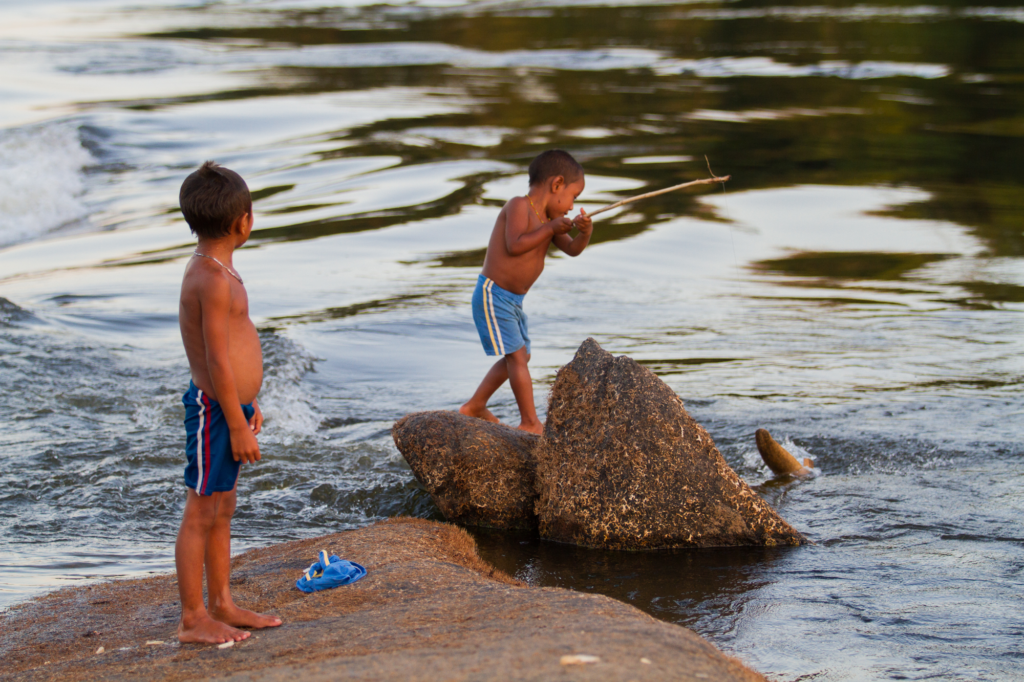 Fish are fetched in the stream of the river with nets. Though motorboats are mostly used for transport, the traditional korjaal is still in favour, for some nearby fishing- or hunting trips. A much more maneuverable boat, carved out of a tree trunk and handled with just a peddle. This of course does acquire experience with the river, trained skills and strength. Nowadays, hunting is mostly done with guns. But when one is out of bullets, the bow and arrow can still do the job! 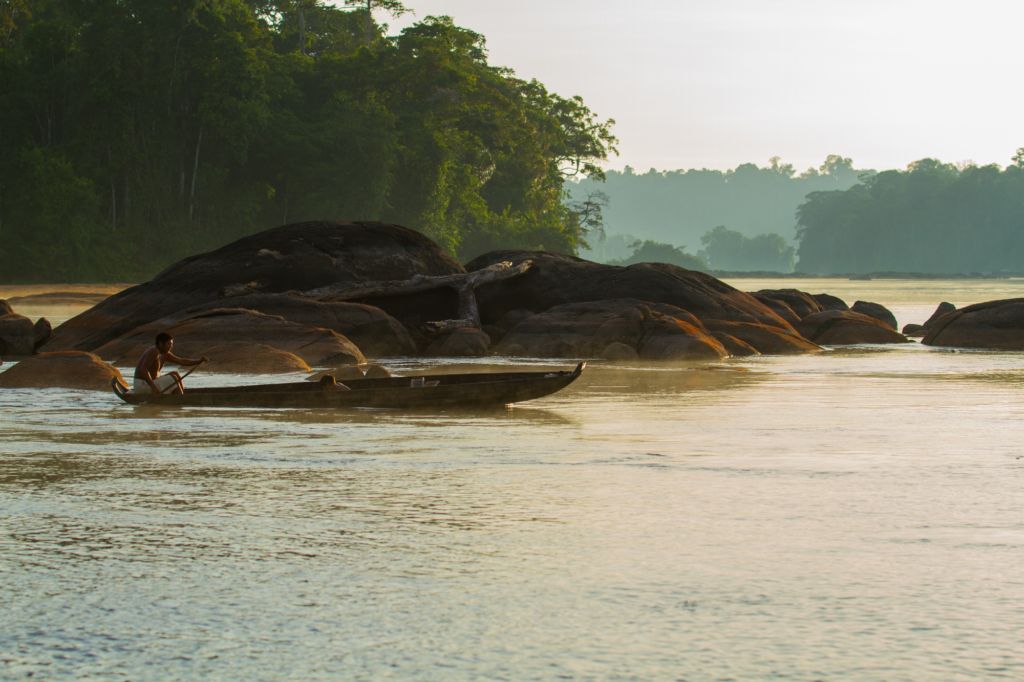 The Wayana themselves don’t appear to be too disturbed by the influences of modern times, but simply embrace the comfort it can offer them in their jungle surrounding. Like electricity, telecommunication and soon to be there: fully operational Internet. They balance, trying to combine old knowledge with new technology. This expresses itself in the enthusiastic exchange of fishing-experience between the Tomahawk-team and the Wayana guides.
Impressed by the possibilities of the modern fishing gear as the Wayana men are, they also show off their own skills. Fetching fish with a simple twig and line or a bow and arrow. 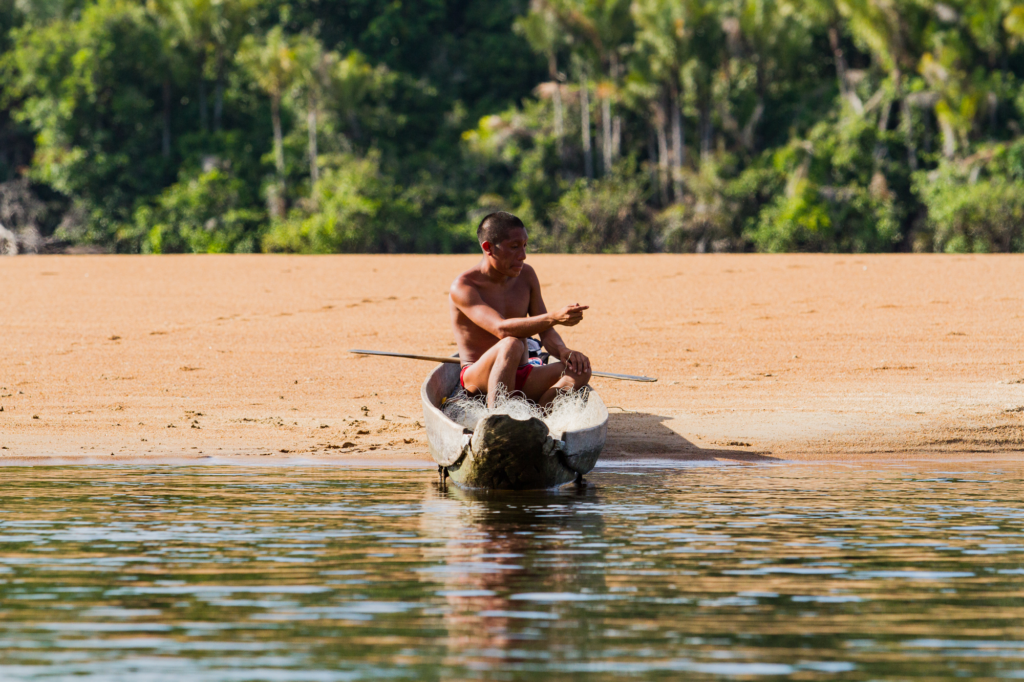